Soup and Spice:Secret of the soup which the taste spread through as for several levels in a mouth. 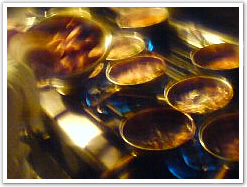 Thoroughly cooked vegetables for more than 10 hours of eight onion flavor such as bouquet garni ,and chicken¸pork¸and beef bones¸ 14 kinds of ingredients¸using the technique of von de Bo Western. Then¸carefully strain in (strainer) Chinois chicken and vegetables and the like. Depth comes out of the bouillon extracted from a meat system to a scent¸the increase of flavor¸and the taste by boiling well bouquet garni vegetables¸etc..
By multiplying the tomatoes and spices to this¸[mellowness of Western soup] + [a refreshing acidity] = a well-balanced entanglement ” Original soup of Cocoro” is finished.
Order to take advantage of the characteristics of the potato¸after it was boiled under whole¸in our shop¸we offer the lightly fried. Because the breed is fine organization¸so it will not blend into the potato soup while you’re eating¸it will bring out the flavor of the soup until the end.
Posted on Monday September 21st, 2015Sunday November 15th, 2015 by cocoro-soupcurry